Robert Burns (1759-1796) was a Scottish poet and lyricist. He is widely regarded as the National Poet of Scotland and a cultural icon. Though much of his poems are in English with a light Scots dialect, he is well known for his skill at writing in the Scots language. His many casual love affairs were legendary. One of his earliest poems, O, Once I Lov’d a Bonnie Lass, was inspired by a young girl named, Nelly Kilpatrick, who worked on his father’s farm during the harvest of 1774. Famous songs he wrote include Auld Lang Syne (1788) and A Red, Red Rose (1794). 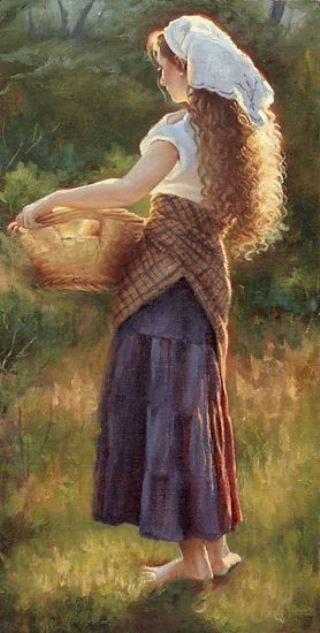 O, Once I Lov’d a Bonie Lass

Once I lov’d a bonie lass,
Ay, and I love her still;
And whilst that virtue warms my breast,
I’ll love my handsome Nell.

As bonie lasses I hae seen,
And mony full as braw;
But, for a modest gracefu’ mein,
The like I never saw.

A bonie lass, I will confess,
Is pleasant to the e’e;
But, without some better qualities,
She’s no a lass for me.

But Nelly’s looks are blythe and sweet,
And what is best of a’,
Her reputation is complete,
And fair without a flaw.

She dresses aye sae clean and neat,
Both decent and genteel;
And then there’s something in her gait
Gars ony dress look weel.

A gaudy dress and gentle air
May slightly touch the heart;
But it’s innocence and modesty
That polishes the dart.

‘Tis this in Nelly pleases me,
‘Tis this enchants my soul;
For absolutely in my breast
She reigns without control.

So fair art thou, my bonnie lass,
So deep in luve am I;
And I will luve thee still, my dear,
Till a’ the seas gang dry.

Till a’ the seas gang dry, my dear,
And the rocks melt wi’ the sun;
I will love thee still, my dear,
While the sands o’ life shall run.