According to Lakota legend . . . during a time of great famine, two scouts who were sent to hunt buffalo in the sacred Black Hills of South Dakota saw something approaching in the distance. At first, they thought it was a white buffalo calf; but as it came closer, they saw it was a beautiful young Indian woman . . . 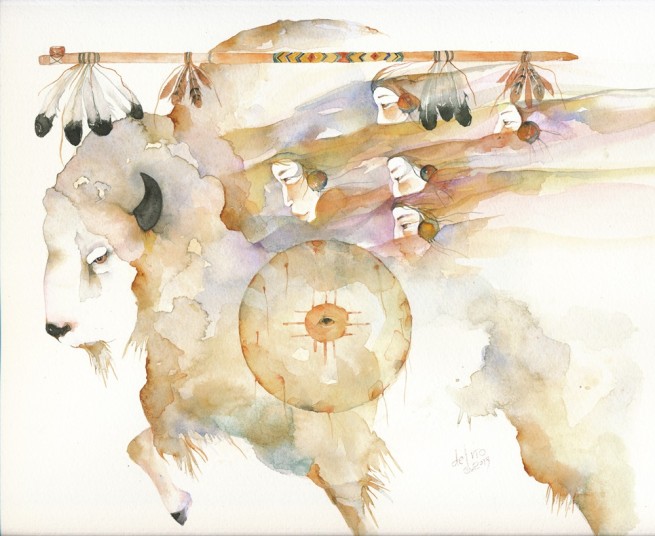 “This holy woman brought the sacred buffalo calf pipe to the Sioux. There could be no Indians without it. Before she came, people didn’t know how to live. They knew nothing. The Buffalo Woman put her sacred mind into their minds.” —Chief Crow Dog (1835-1910)

This sacred woman of supernatural origin met with the Lakota people, gave them the sacred pipe, and taught them the “Seven Sacred Rituals” which provided guidelines for living. When she was finished and leaving, she rolled upon the earth four times, changing color each time—from yellow to red to white and finally black—before she disappeared. Almost at the same time, great herds of buffalo were said to have surrounded the camp and, after that day, food was plentiful.

The Gift of the Sacred Pipe
by Black Elk, Holy Man of the Oglala Sioux
as told to Joseph Epes Brown in The Sacred Pipe 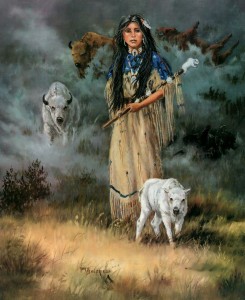 Early one morning, very many winters ago, two Lakota were out hunting with their bows and arrows. As they were standing on a hill looking for game, they saw in the distance something coming towards them in a very strange and wonderful manner. When this mysterious thing came nearer to them, they saw that it was a very beautiful woman, dressed in white buckskin and bearing a bundle on her back.

Now this woman was so good to look at that one of the Lakota had bad intentions and told his friend of his desire. His friend said that he must not have such thoughts for surely this is a wakan woman. The mysterious person was now very close to the men; and, putting down her bundle, she asked the one with bad intentions to come over to her. As the young man approached the mysterious woman, they were both covered by a great cloud. Soon, when the cloud lifted, only the sacred woman was standing there. At her feet was the man with the bad thoughts who was now nothing but bones, and terrible snakes were eating him.

“Behold what you see!” the strange woman said to the good man. “I am coming to your people and wish to talk with your chief Hehlokecha Najin (Standing Hollow Horn). Return to him, and tell him to prepare a large tipi in which he should gather all his people and make ready for my coming. I wish to tell you something of great importance!”

The young man then returned to the tipi of his chief and told him all that had happened—that this wakan woman was coming to visit them and that they must all prepare. The chief, Standing Hollow Horn, then had several tipis taken down, and from them a great lodge was made as the sacred woman had instructed. He sent out a crier to tell the people to put on their best buckskin clothes and to gather immediately in the lodge. The people were, of course, all very excited as they waited in the great lodge for the coming of the holy woman, and everybody was wondering where this mysterious woman came from and what it was that she wished to say.

Soon the young men who were watching for the coming of the wakan person announced that they saw something in the distance approaching them in a beautiful manner. Suddenly, she entered the lodge, walked around sun-wise, and stood in front of Standing Hollow Horn. She took from her back the bundle, and holding it with both hands in front of the chief, said: “Behold this and always love it! It is lela wakan, and you must treat it as such. No impure man should ever be allowed to see it, for within this bundle there is a sacred pipe. With this, you will, during the winters to come, send your voices to Wakan-Tanka, your Father and Grandfather.“

After the mysterious woman said this, she took from the bundle a pipe and also a small round stone which she placed upon the ground. Holding the pipe up with its stem to the heavens, she said: “With this sacred pipe, you will walk upon the Earth, for the Earth is your Grandmother and Mother, and She is sacred. Every step that is taken upon Her should be as a prayer. The bowl of this pipe is of red stone; it is the Earth. Carved in the stone and facing the center is this buffalo calf who represents all the four-leggeds who live upon your Mother. The stem of the pipe is of wood and this represents all that grows upon the Earth. And these twelve feathers which hang here, where the stem fits into the bowl, are from Wanbli Galeska, the Spotted Eagle, and they represent the eagle and all the wingeds of the air. All these peoples, and all the things of the universe, are joined to you who smoke the pipe—all send their voices to Wakan-Tanka, the Great Spirit. When you pray with this pipe, you pray for and with everything.”

The wakan woman then touched the foot of the pipe to the round stone which lay upon the ground, and said: “With this pipe, you will be bound to all your relatives; your Grandfather and Father, your Grandmother and Mother. This round rock, which is made of the same red stone as the bowl of the pipe, your Father Wakan-Tanka has also given to you. It is the Earth, your Grandmother and Mother, and it is where you will live and increase. This Earth which He has given to you is red, and the two-leggeds who live upon the Earth are red; and the Great Spirit has also given to you a red day, and a red road. All of this is sacred, and so do not forget! Every dawn, as it comes, is a holy event; and every day is holy, for the light comes from your Father Wakan-Tanka; and also you must always remember that the two-leggeds and all the other peoples who stand upon this earth are sacred and should be treated as such.”

The wakan woman continued: “From this time on, the holy pipe will stand upon this red Earth, and the two-leggeds will take the pipe and will send their voices to Wakan-Tanka. These seven circles which you see on the stone have much meaning, for they represent the seven rites in which the pipe will be used. The first large circle represents the first rite which I shall give to you, and the other six circles represent the rites which will, in time, be revealed to you directly. Standing Hollow Horn, be good to these gifts and to your people, for they are wakan! With this pipe, the two-leggeds will increase, and there will come to them all that is good. From above Wakan-Tanka has given to you this sacred pipe, so that through it you may have knowledge. For this great gift you should always be grateful! But now before I leave I wish to give to you instructions for the first rite in which your people will use this pipe.”

The Seven Sacred Rites of the Lakota

“It should be for you a sacred day when one of your people dies. You must then keep his soul as I shall teach you, and through this you will gain much power; for if this soul is kept, it will increase in you your concern and love for your neighbor. So long as the person, in his soul, is kept with your people, through him you will be able to send your voice to Wakan-Tanka. It should also be a sacred day when a soul is released and returns to its home, Wakan-Tanka, for on this day four women will be made holy, and they will in time bear children who will walk the path of life in a sacred manner, setting an example for your people. Behold me, for it is I that they will take in their mouths, and it is through this that they will become wakan. He who keeps the soul of a person must be a good and pure man, and he should use the pipe so that all the people, with the soul, will together send their voices to Wakan-Tanka. The fruit of your Mother the Earth and the fruit of all that She bears will be blessed in this manner, and your people will then walk the path of life in a sacred way. Do not forget that Wakan-Tanka has given you seven days in which to send your voices to Him. So long as you remember this, you will live; the rest you will know from Wakan-Tanka directly.”

The sacred woman then started to leave the lodge, but turning again to Standing Hollow Horn, she said: “Behold this pipe! Always remember how sacred it is, and treat it as such, for it will take you to the end. Remember, in me there are four ages. I am leaving now, but I shall look back upon your people in every age, and at the end I shall return.“

Moving around the lodge in a sun-wise manner, the mysterious woman left, but after walking a short distance she looked back towards the people and sat down. When she rose the people were amazed to see that she had become a young red-and-brown buffalo calf. Then this calf walked farther, lay down, and rolled, looking back at the people, and when she got up she was a white buffalo. Again the white buffalo walked farther and rolled on the ground, becoming now a black buffalo. This buffalo then walked farther away from the people, stopped, and after bowing to each of the four quarters of the universe, disappeared over the hill.

No definitive version of the story exists . . . The story shifts and shapes itself to the people, it grows and adapts. Through the oral tradition, it was handed down, and the story changed over time and will continue to change. What most versions agree upon, though, is . . . She brought the sacred pipe. She brought meaning, essence, life, spirituality. She brought hope.

The Sacred Pipe: Black Elk’s Account of the Seven Rites of the Oglala Sioux, Recorded and edited by Joseph Epes Brown • During the winter of 1947, Black Elk, the Oglala Sioux holy man, related to Joseph Epes Brown seven of the sacred Oglala traditions, including such revered rites as “The Keeping of the Soul,” “The Rite of Purification,” and “Preparing for Womanhood.” The San Francisco Chronicle calls Black Elk’s narrative “a valuable contribution to American Indian literature.” END_OF_DOCUMENT_TOKEN_TO_BE_REPLACED